Our reporters Jayden and Ava T from Year 6 have this to share about their Synergy Solar Car Challenge experience.

On the 2nd of April 2019 St Emilie’s went the Synergy Solar Car Challenge at Mazenod College. The children who represented us were Sophia C, Sophia E, Ava T, Jayden, Jacob and Jack T.  Mrs Ryan attended the event with us, so thank you so much for coming, we really appreciate it.

We started to build our car at 9:30 am. The first thing Sophia C and Sophia E placed was the axel in the wheel while Jack worked on the putting the gear into the other wheel and axel. Next Jack placed the wheels and the gears into the chassis. Next Sophia C worked on putting the wires into the solar panel. Jacob put the guide pins on the chassis.

We measured it with a piece of paper before we started the building process.  We measured the track to see where to put the guide pins. We snipped the wires with the pliers to make the wire even. Jacob added the switch and the 2 wires. We had a small battery case and batteries in case it was too cloudy, but it was a beautiful sunny day!

Jack and Sophia E worked on placing the motor on the chassis. We used the alligator clips to attach the wires. Sophia C placed the alligator clips onto the motor.  We had some difficulty with the cable ties. In our kit we didn’t get a cable tie. We attached the solar panel to the chassis. We propped up the solar panel with some small foam blocks. So far it was looking good. Jack put the battery pack on the chassis.  Then we balanced it.

We went outside at 10am to go to test drive it to see if it worked. Then we could fix anything that didn’t work.  We placed the car on the track, and it moved nice and smooth. It is a very fast car. There was just one problem.  It was not revving hard enough. We were feeling so confident about the race. But we were trying our best to make it work. Sophia E and Jack were trying to fix the car up to make our car the best.

We were starting to become more confident about our car.  It was now even faster than before.  But it was still not going as quick as it should.  We were very stressed by now.  We raced for a third time for good measure.  We did a quick change of gear.  We raced it for one more time.  We all thought it was really good. We stood a chance of winning.  We went back inside at 10:20 and at 10:30 we were going to start to race our cars.

We went outside to race.  Our number was number 6 and were in round 4.  On the first race we came 1st even when we started the races and our car didn’t start up straight away.  All the other cars were ahead of ours at that time, but our car started up and we overtook all the cars. On the second race we came 1st again but our car didn’t stop at the beginning that time.   We had major good luck, but we still had 2 more rounds to go. 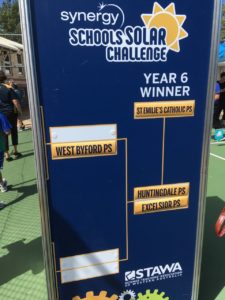 Here are some movies of our experience.