This term in Year Four we have been learning all about decimals in Mathematics. We know that a decimal number is another way of writing a number which has a fraction. Decimal numbers can be less than or greater than 1.0. The decimal point is used to separate the whole number from the fraction.

Decimals are all around us! We see decimals when we are:

Recording how long something takes in minutes and seconds (time) – Julien

Reading how heavy an object is using scales (mass) – Vyshnavi 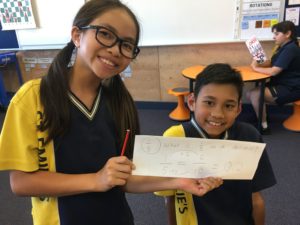 To help us understand decimals, we have been exploring the relationship between decimals and fractions. We know that we can convert fractions of tenths easily into decimals. We have also been playing some games like ‘Human Decimal Number Line’ and ‘Converting Decimals Two-Step’. These fun games help us to make connections between fractions and decimals.

Did you know? Decimals can go on forever and ever! – Blake

Did you know? Decimals are related to fractions AND percentages! – Louis

We can’t wait to learn more about decimals!